By Martin Davies - July 25, 2017
What a competition? Just brilliant. Top quality cricket from top quality players. And of course a fabulous finale. But what of the Bloggers' Predictions? Just for a bit of fun we thought we ought to have a quick look at the facts now the tournament is over. If a blogger had a near miss we have added a 🙂. For a bullseye we've added a 😊. Thanks to everyone who read the WWC17 Blog. We've enjoyed being at all the games and trying to help people enjoy the tournament. Cheers MD, DM, SP, RN & SE Who do you think will be the top run scorer? 🙂  Martin Davies  : There are a few candidates, but the most consistent ODI performer over the last couple of years is  Ellyse Perry , so she gets my vote. Don Miles  : For me it has to be  Meg Lanning . If you are the world's best it should be you if you keep your nerve. 🙂  Snehal Pradhan  : I'm going for   Ellyse Perry  too. Raf Nicholson  : I'm going to say  Suzie Bates . She managed it last time and, if anyt
2 comments
Read more

By Martin Davies - July 23, 2017
I have written and re-written this piece so many times in the last 40 minutes that it is ridiculous. The reason is that this game has have ebbed and flowed so much before England finally come out on top by just nine runs with eight balls left. Every game has turning points, but this one has had so many. As India chased down 229 to win the World Cup the first was the lackadaisical run out of Mithali Raj in the 13th over as Nat Sciver swooped in from cover. It reduced India to 43/2 in the 13th over and it meant that India's talisman was on her way back through the Long Room. England were on top. But Punam Raut (86) and Harmanpreet Kaur (51) showed that there will be life in the India team when Raj decides to hang up her spikes. They built nicely, and hit boundaries when they needed them, and took India ahead of the Duckworth Lewis score as they got to the 25th over. The game looked to be going away from England, but the return of Alex Hartley saw Kaur make the fatal mistake - ano
1 comment
Read more

By Raf Nicholson - July 20, 2017
In the 36th over of India’s innings today, Alyssa Healy threw in the ball, hard. So hard that she broke the electrical circuit in the stumps. It wasn't the only thing broken today. By the end of the 42nd over - a foreshortened game, today, due to rain - India had finally broken the Australian bowling attack. What’s more, they broke it so hard that - unlike the stump, which could be replaced (almost) immediately - it crumbled into nothing and saw Australia flying home, having failed to make the final of a global tournament for the first time since 2009. I say India. Really, though, today belongs to one player: Harmanpreet Kaur. She had walked out to bat in the 10th over, with India 35-2 - Smriti Mandhana continuing her run of low scores (caught at cover for 6); swiftly followed by Punam Raut holing out to deep midwicket. There was initially little sign of the onslaught to come. The first five balls she faced went: dot, 1, dot, dot, 1. The fifth, though, was crea
1 comment
Read more 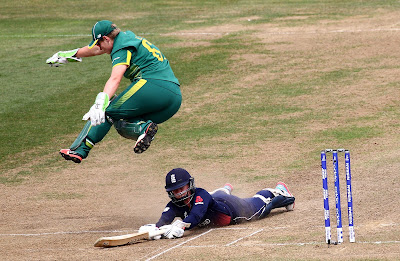 Woah!!!! Who would have thought it when South Africa posted 218/6? It seemed far too few, but this is a World Cup semi-final. Mark Robinson wanted his team to be tested and tested they were, as the Saffers took the game down to the last over, and then to the last three balls. England still needed two runs and Anya Shrubsole had just walked to the crease after Laura Marsh had been bowled by Shabnim Ismail. Ismail had a packed offside field but no-one out. Ismail bowled full and wide and Shrubsole flayed the ball to the cover boundary, immediately lofting her bat in triumph....and relief! In truth it should never have got to that stage, after England had got to 52/1 after the first 10 over powerplay, having lost Lauren Winfield (20). South Africa will be kicking themselves. They had helped England along the way with several wides, many mishandled by keeper Chetty. In total they gave away 17 runs in wides, and gave England an extra 13 balls (10 wide deliveries and three no balls).
1 comment
Read more

By Snehal Pradhan - July 16, 2017
It very nearly was the perfect game. Like coal spontaneously igniting when the conditions are just right, India rekindled their fading World Cup campaign with all three departments coming together. They beat New Zealand by 186 runs, and reached the semi-final of a ICC global event for the first time since 2010. It began with the flip of the coin. In England, they say ‘look up and then look down’. But even that advice left one confused. Above, it was overcast, but the pitch itself was hard and reflected runs. Fortunately, Kiwi skipper Suzie Bates opted to field. And it seemed a good decision when both Indian openers were sent back with just 21 on the board. But that was about all that went wrong for India. Harmanpreet Kaur, batting at No. 4, had faced an average of just 30 balls per game in the six matches before this. So she took her time early, facing 28 dot balls for three runs against fast bowler Hannah Rowe. But with the patience of a big cat stalking its prey, she waited for
1 comment
Read more

By Raf Nicholson - July 15, 2017
On a gloomy day at Leicester, the last group-stage match of the World Cup went right down to the wire, with Pakistan eventually bowled out for 206, just 16 runs short of their target. Chasing 222, and with 22 runs needed from the last 5 overs, Pakistan’s Asmavia Iqbal fought tooth and nail to get her side over the line, but was eventually left stranded on 38* after number 11 Sadia Yousaf was bowled by Sri Lankan captain Inoka Ranaweera in the 47th over. For Sri Lanka, the star was Dilani Manodara, who hit 84 - her best performance in international cricket - and finished as the day’s top scorer. Pakistan had started their run chase at a rather sedate pace, hitting just 33 runs off the 10 over powerplay, including playing out two maidens. They also lost early wickets, with Chandima Gunaratne (Player of the Match for her 4-41) removing both openers - Nahida Khan bowled trying to cut, and Ayesha Zafar getting a leading edge to Chamari Atapattu at cover. But a thrilling
3 comments
Read more

By Syd - July 15, 2017
West Indies won the toss and put an unchanged England team in to bat, on a drizzly morning in Bristol. In gloomy conditions, with the floodlights on and the ball swinging like a 1930s music hall, England openers Lauren Winfield and Tammy Beaumont made a tentative start, with Winfield surviving three shouts (two for LBW and one for caught behind) in Deandra Dottin’s opening over. The first boundaries didn’t come up until the sixth over - Tammy Beamont clubbing Qianna Joseph over midwicket for one 4, and then drilling her through the covers for another. England got into their stride a bit more thereafter, though they had West Indian wicket keeper Merissa Aguilleira to thank for some sloppy work behind the stumps adding 17 runs in wides during the powerplay. Winfield - the one England batsman who hasn’t really done anything this tournament - holed-out off to Joseph for 11 off 24 balls, trying to play a big shot that just wasn’t big enough and found Hayley Matthews on the boundary.
1 comment
Read more

By Martin Davies - July 15, 2017
Australia brought their A game to Taunton to beat South Africa by a comfortable margin of 56 runs, despite once again being without their skipper, Meg Lanning. As before Rachel Haynes stepped up to take the captaincy role, and even batted at three and brought herself on to bowl. The first thing she did was win the toss and she mysteriously decided to bat, but as Beth Mooney (53) and Nicole Bolton (79) compiled a chanceless opening partnership of 114 and the rain blew over the Quantock Hills in the distance, it didn't seem like such a bad idea after all. There were few demons in the pitch and the Proteas attack lacked any real threat. When Mooney succumbed to a straight ball from Khaka in the 22nd over you could see the frustration on her face. A wasted opportunity. It was a look that was to be mirrored by several more Aussies. Haynes came and went, and then Bolton slapped a horrible full toss from Sune Luus to mid-off. Villani followed next ball helping another full toss arou
1 comment
Read more

By Snehal Pradhan - July 15, 2017
After starting the World Cup with four wins in a row, India slumped to their second consecutive loss on Wednesday. At Bristol, they were defeated by a dominant Australia, despite a fighting century from Punam Raut, and a 69-run knock from Mithali Raj. The skipper also became the highest ODI run-scorer during that knock, and the first woman to score more than 6,000 ODI runs. But those marks meant little, as India now face a virtual quarter-final against New Zealand on Saturday at Derby. Some of the key points in the game: Different approaches from captains The day before the game, Australian skipper Meg Lanning identified Smriti Mandhana as a prize wicket. Mandhana came into this game with three single digit scores behind her. So Lanning made sure to put her under some more pressure by opening the bowling with off-spinner Ash Gardener, who had never bowled at the top before. Lanning also had three catchers, two in Mandhana’s sights – there was a short point to block her favou
Post a Comment
Read more

By Martin Davies - July 13, 2017
Nat Sciver not only scored her second hundred of the tournament and took England into the semi-finals, but she created her own shot - the Natmeg - clipping a full ball on her leg stump through her own legs - not once, but twice!! It epitomised the confidence with which she, and indeed the whole of the England team, are batting at the present time. England ended up comfortable winners, by 75 runs, against a workmanlike Kiwi team, thanks to a partnership of 170 between Tammy Beaumont (93) and Sciver (129), which took them to a formidable 284/9 in their 50 overs. Having won the toss Heather Knight had no hesitation in batting, but when Lauren Winfield, Sarah Taylor and she herself, were all out with the score on 52 in the 14th over, it looked like England may struggle to set a total that would put fear into the Kiwi batsmen. But that was not to count for Beaumont and Sciver. Beaumont had made a cautious start, but buoyed by the assurance of Sciver she began to find the gaps in the
2 comments
Read more
More posts